Mind maps are, from wikipedia:

A mind map is a diagram used to visually organize information. A mind map is hierarchical and shows relationships among pieces of the whole. It is often created around a single concept, drawn as an image in the center of a blank page, to which associated representations of ideas such as images, words and parts of words are added. Major ideas are connected directly to the central concept, and other ideas branch out from those.

Mind maps can be drawn by hand, either as “rough notes” during a lecture, meeting or planning session, for example, or as higher quality pictures when more time is available. Mind maps are considered to be a type of spider diagram. A similar concept in the 1970s was “idea sun bursting”.

In Layman’s terms, that’s just the kind of brainstorm you do on a paper: Linking ideas together, creating relations between them.

I’m currently working on a project that requires me to find cycles between researches that have correlations that may link them together and that is the perfect solution.

I was already doing mind maps but had no clue softwares existed for this specific purpose until stark, a nixers forum member, pointed this to me.

So here we go, what are the available mind map softwares on Unix and what is there to know about them. 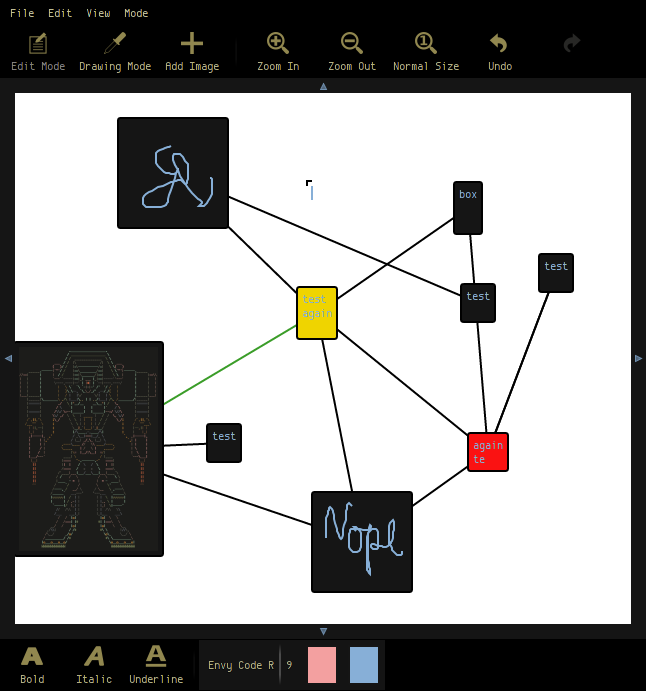 Let’s start with the most lightweight mind map software. It has a very simple gtk interface.

When it opens it presents a list of the previously worked on mind maps. There are no other options than opening an old one or creating a new.

The UI is straightforward, nothing fancy.

You only have boxes linked together by lines.

To add a box/idea linked to another one you have to select the box you want it linked to then click anywhere and it’ll let you input a name for it, ESC, and that’s it.

You have the choice between text boxes, boxes which you can draw in, and images.

You can link and unlink thoughts using ctrl-L.

You can only export the project as a PNG image or as a labyrinth project.

It’s missing exporting in other formats and the designing part is too shallow, it looks blunt.

It does the job and only that, moreover it’s super small. If you have a small project where you want to instantly brainstorm then that’s a great option even though it may be confusing for bigger mind maps as all the box don’t seem to have any hierarchy built-in. 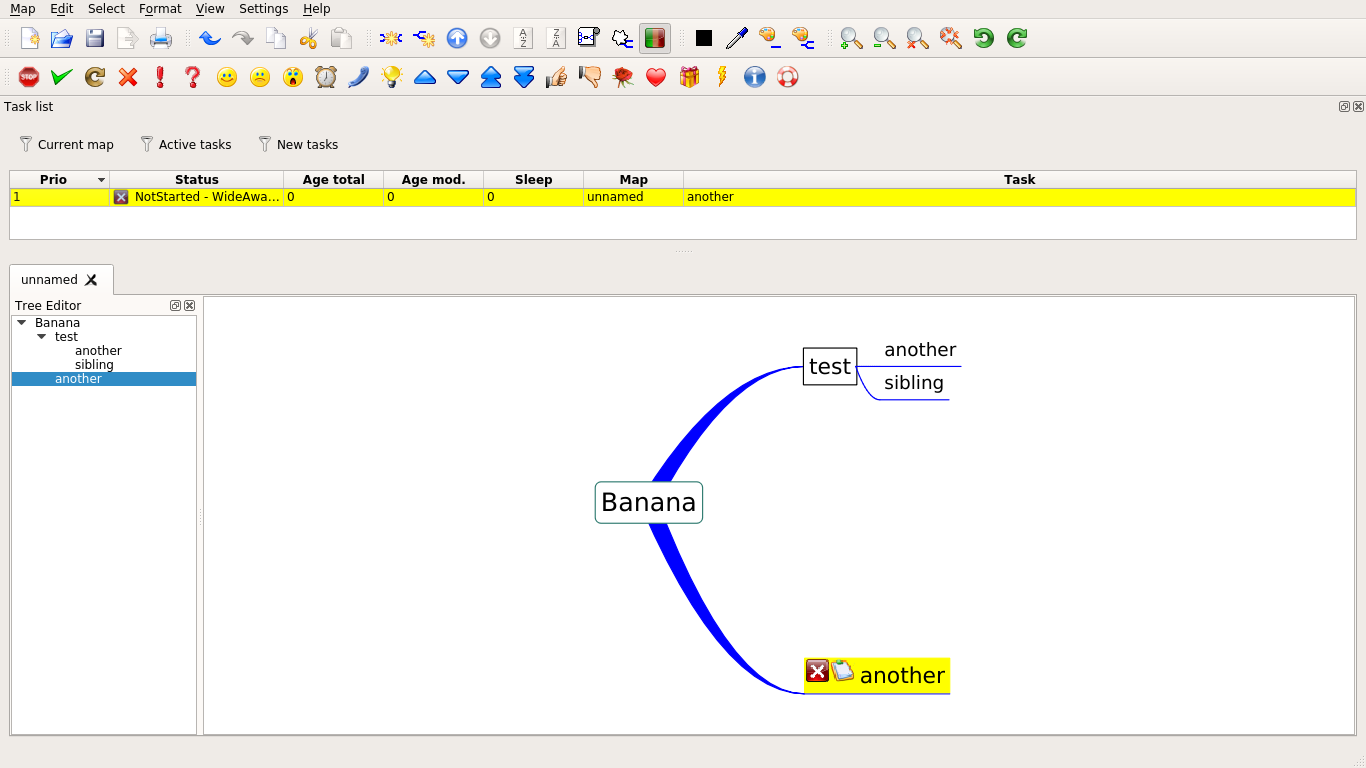 vym has a complex but straightforward UI.

It opens with a map editor, a single yellow node in the middle. You can right click anywhere and choose in the context menu to add nodes that are related to the currently selected node; That is a child branch or a node on the same branch.

It follow a tree structure and this shows by the way everything is presented. The node in the middle is larger than the rest and the lines connecting them are thiner as you go deeper within the tree.

The software also has the concept of tasks, that is you can assign status to nodes: NotStarted, WIP, Finished. It has a view dedicated for this purpose.

There are multiple format to export the mind map to, most notably:

The one that thing got on my nerves while using it was that my mind maps were not necessarily in a tree based structure. Things that come out of your mind might not follow the parent children relationship that a tree has it may have inner cycles in it - And that’s what I was looking for.

Another thing that is to note is that the styling, while being better than labyrinth is still blunt.

vym is good for organizing tasks, that’s what I would recommend it for. 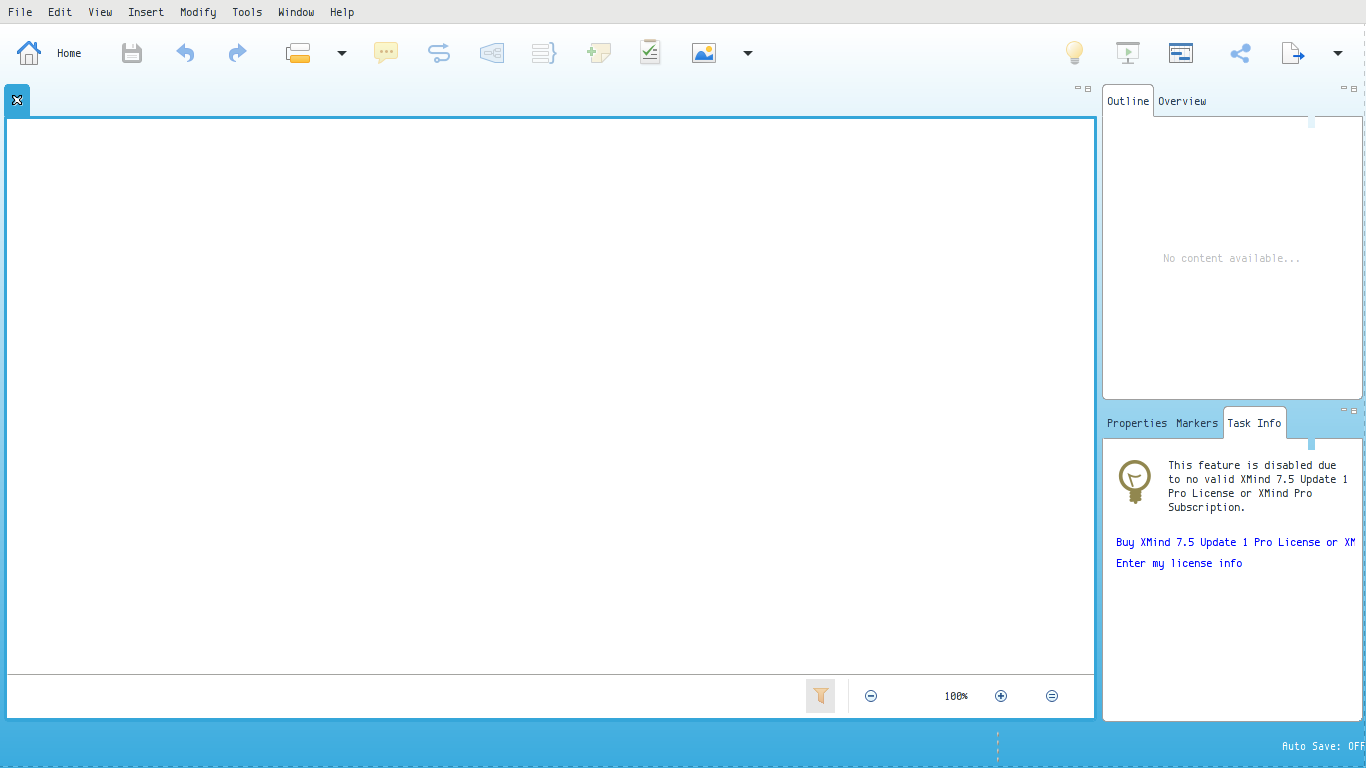 XMind is a proprietary software.

This software is not licensed. Enter License Key to activate XMind Pro/Plus.

It bugs you about signing up and entering license keys.

Nothing seems to work without it.

I wouldn’t recommend a non-free software. 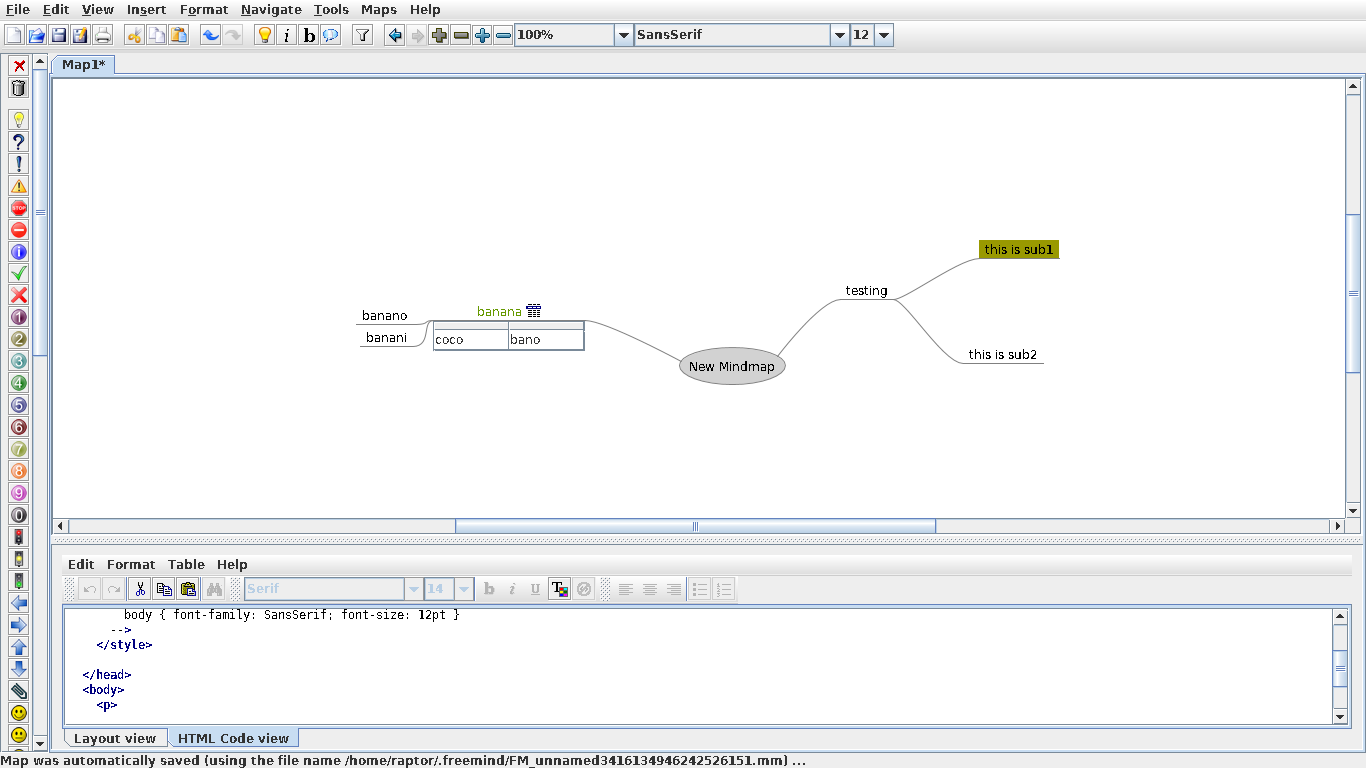 Freemind begins by exposing you with the biggest part of the screen dedicated to drawing you mind map, a big wide canvas with only a central node to stain it.

It is surrounded by the tools that will help you, in the same way that gimp does.

If a node is selected you can press “insert” to add a new node as a child or as a node on the same branch. In the same manner vym did.

Also, just like vym, it automatically gives a different style to children nodes. However here you got more flexibility with styling.

It’s also easier than vym to move the nodes around.

One thing that is particularly nice with freemind is the export to HTML. There’s the flexibility to change the html styling that is going to be applied directly from the software.

One thing that should have been mentioned, that is also present in vym, is that you can add an anchor url to the nodes.

It supports most formats, multiple HTML ones that you need to try on your own to understand the difference. Unlike vym, it doesn’t support exporting to a text format such as markdown.

Just like all previous programs, freemind doesn’t allow to add free-roaming nodes and link them to others. It doesn’t let you have cycles within the graph.

freemind is a nice option for mind mapping, if you are sure that your ideas are tree-shaped then this is the absolute goto. 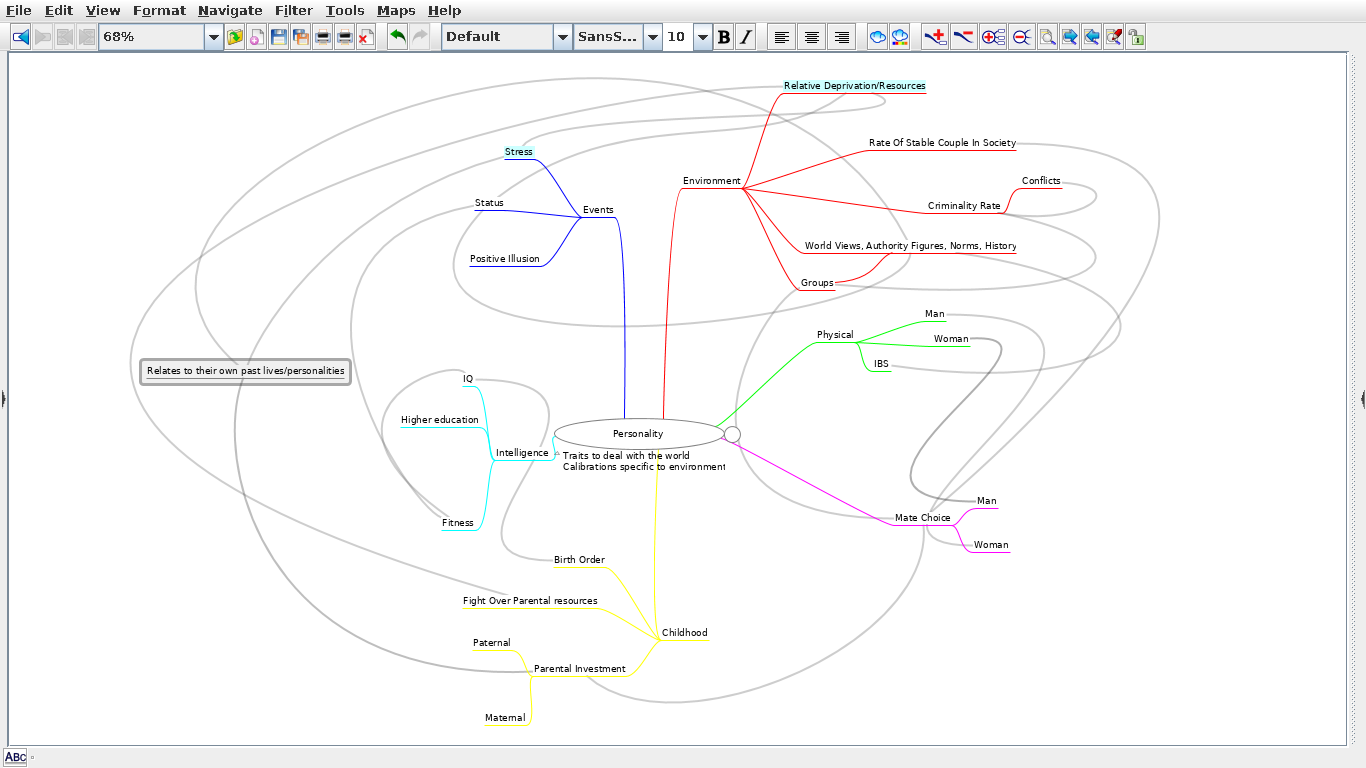 Freeplane is my personal favorite between the previous alternatives.

It starts with a clutter free UI, even more than freemind.
It actually started as a fork of freemind.

And thus it works in the same spirit, only that it also allows to insert floating nodes and linking nodes from different parents.

The styling is also more advanced letting you run wild with your imagination.

And just like freemind, it let’s you edit the HTML parts.

Every format possible, from pdf, html, to dynamic html, to svg, to ascii.

The only issue I’ve encountered is that when there are too many children to a node moving them will also move other children so that they don’t overlap.

I would highly recommend it as it’s the only one, other than labyrinth, that allow floating nodes and doesn’t restrict the tree hierarchy.

You can find a full list of mind map softwares on this wikipedia page.

This is it folks, give mind maps a try!