This thread is about a must have software engineer tool called an UML(Unified Modeling Language) designer.

More precisely, it’s about finding the open source UML Editor/Designer that you need.

I’ve been doing a lot of UML editing and design patterns lately. It is a must for software engineers and developpers to know how to design and understand UML. With my current workflow I had to switch from UML designing on paper to UML designing on the computer. And thus the unevitable question came to my mind: “What editor are available and which one should I choose?”. I didn’t find any useful comparison online, all of that I found was people praising their own tool for their own benifits.

What I was looking for was something simple without too much dependencies, simple as in that only knowing UML I could simply put what was in my mind directly in the software, and something that could construct a UML from some source files.

From a lot of searches, downloads, trials, and errors, I present my software review.

gaphor - An easy to use modeling environment for UML design 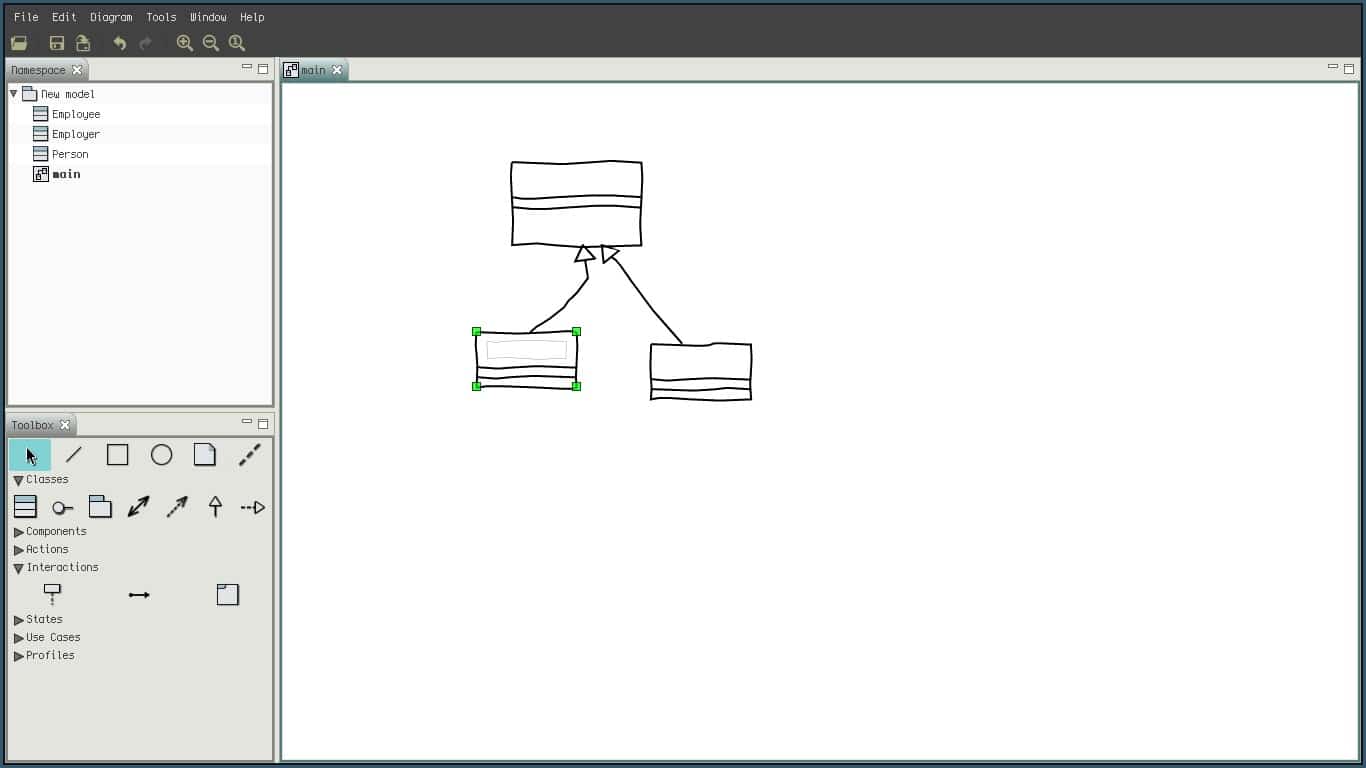 Gaphor is straight forward and easy to use. It was the first UML Designer I installed. I was directly shocked by its simplicity it made the work so much easier. It also let you save/export the project as an image which is useful. The only drawbacks are that it doesn’t look good, or hides parts of the GUI, if you use a dark gtk2 theme, and that the class boxes don’t let you add attributes nor methods. It’s also missing the composition relation. The binary of Gaphor is around 23MB with some python libraries dependencies on the side.

I had to pull around 70MB of package that weren’t related to the software to get umbrello installed. …and finally the program was installed. BUT, umbrello wouldn’t want to start, I was getting the following error: [code]

However, I didn’t give up and tried the program on a friends computer. I can say that Umbrello is pretty impressive. It has all the features needed, all the UML schema (from use case to class diagram), and you can export/import class diagrams in multiple languages.

Umleditor was very light, around 7MB. When starting it I was presented with a cheap splash screen and then a white window popped-up. The interface of umleditor is not friendly at all, I couldn’t even figure out how to create a class. The buttons icons don’t even have text equivalent so it got me completely lost. 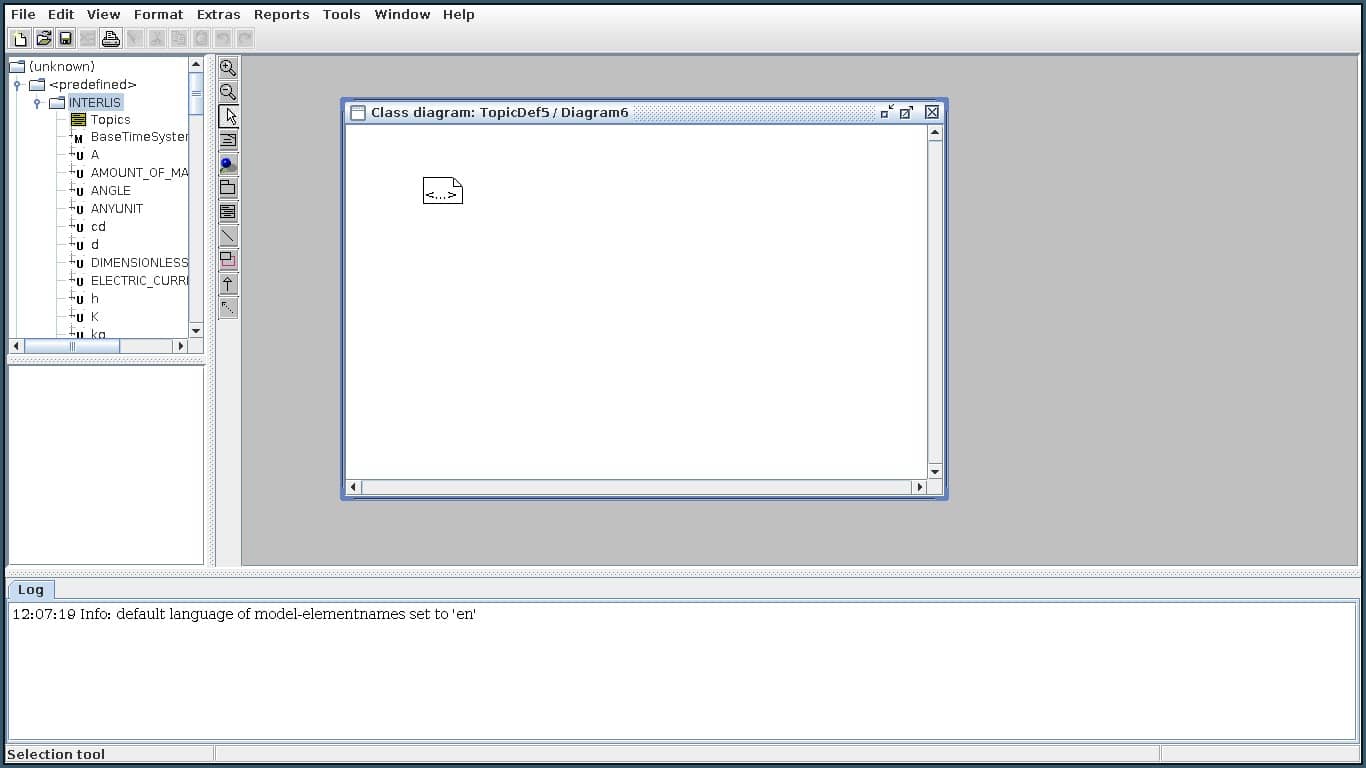 Umlet is also, like umleditor, very light (around 6MB). The idea with umlet is that you have all the available elements on the top-right corner and you drag them in the empty window on the left. You can’t directly edit the class attributes you have to change the properties in the bottom-right box which can get very annoying. 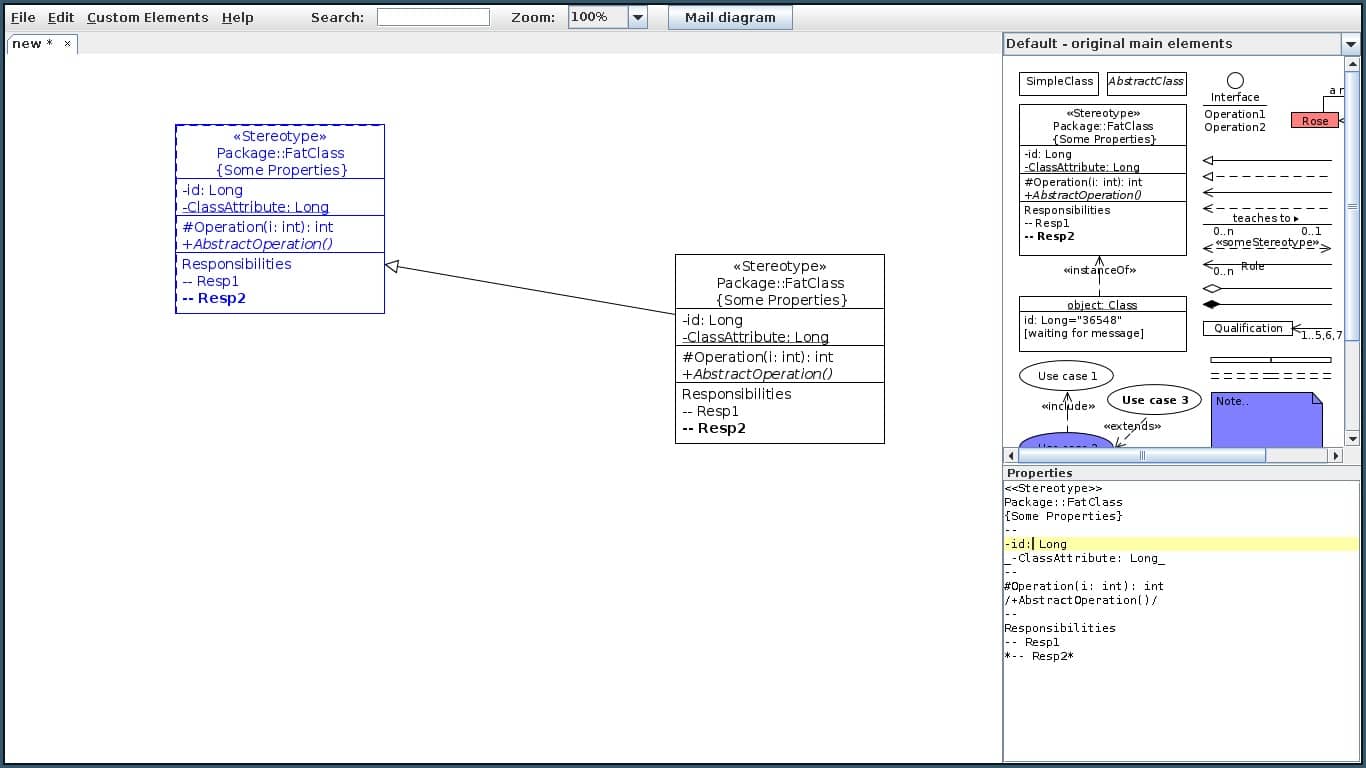 It turned out that bouml isn’t free:

Violet has a prety interface but the controls are sluggish. I tried dragging the elements in vain. 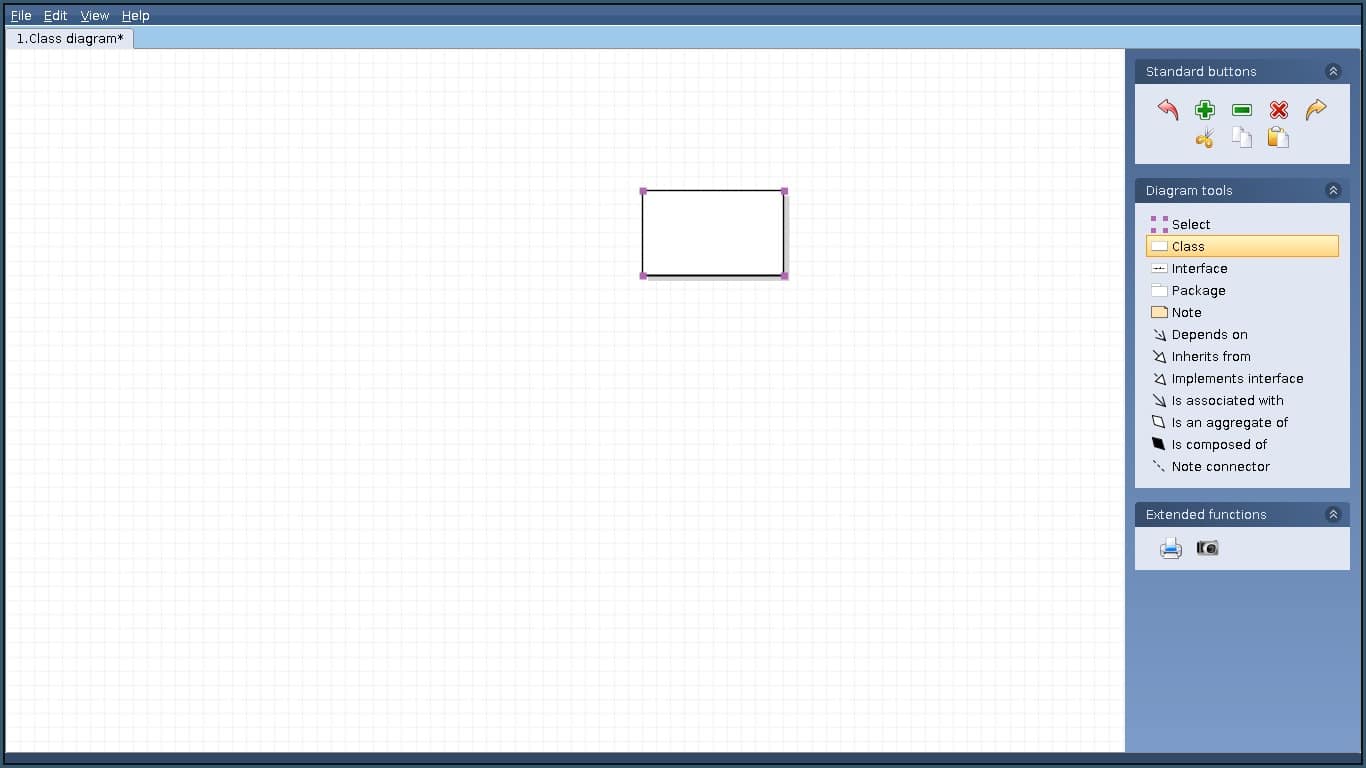 This thing was huge (60MB) and also greeted me with a blank window. 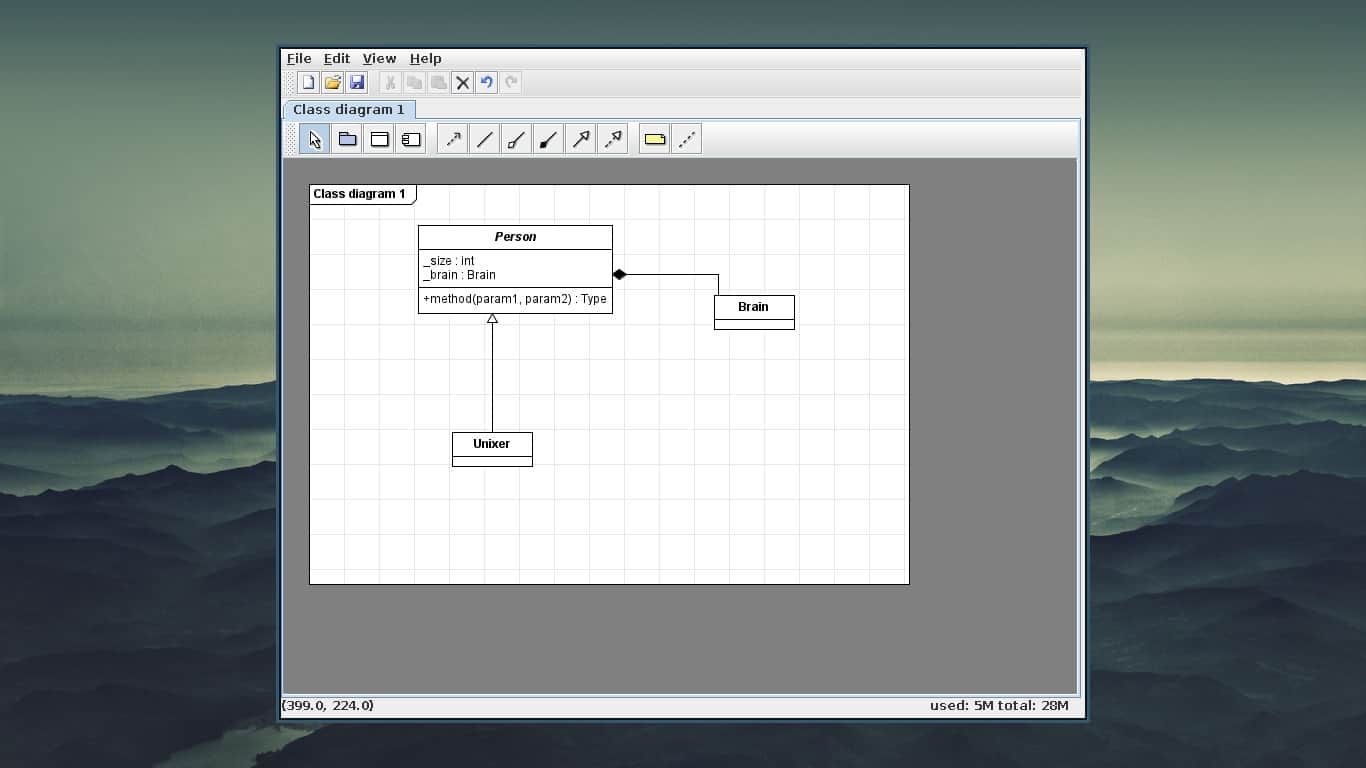 Tinyuml is indeed tiny with a size of 600KB. It has everything needed to do a complete class diagram, but it has only that and nothing else. It can export the project as an image. Let’s note that the GUI is a pain to use. 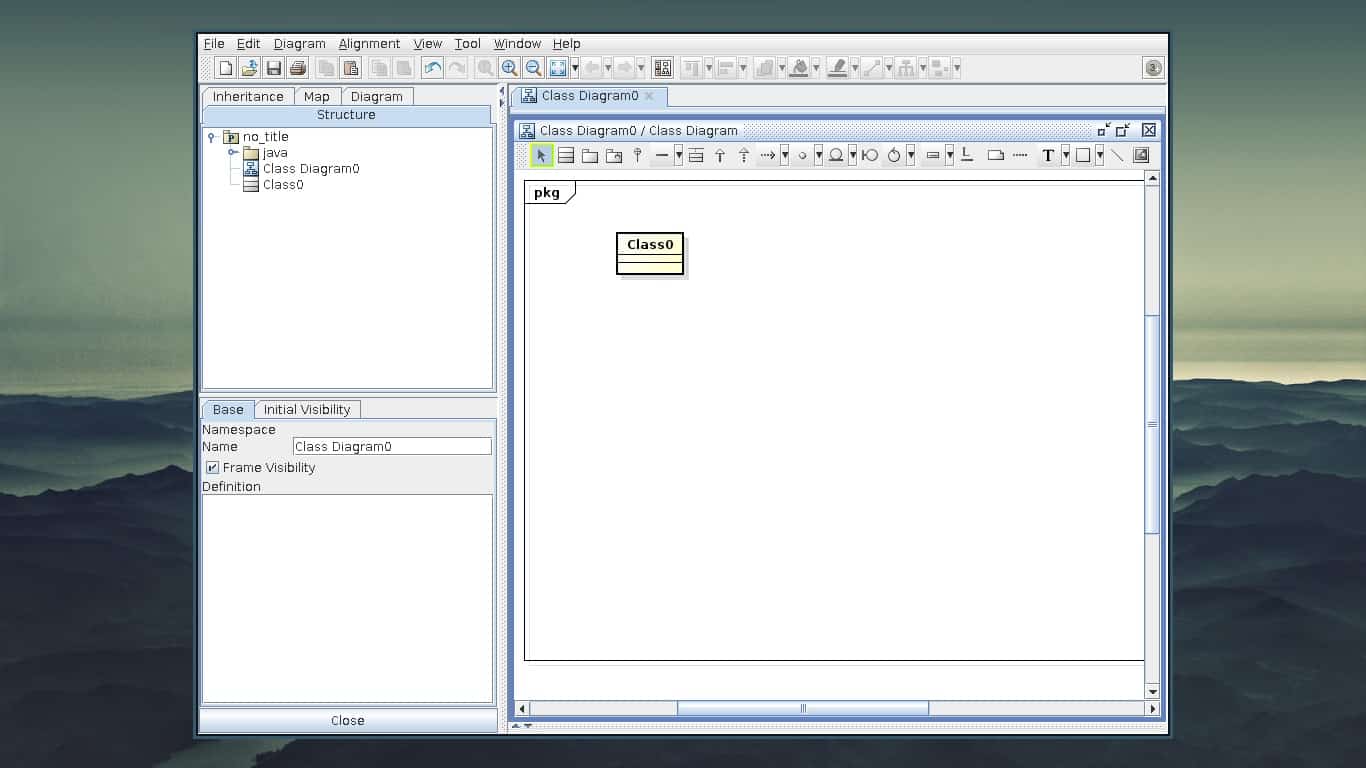 Astah is pretty big (30MB), slow, ugly, hard to use and written in java. It also isn’t opensource but still has some free features.

modelio-open - Modelio is an Open Source UML tool developed by Modeliosoft. It supports the UML2 and BPMN2 standards.

This program is 200MB so I didn’t bother downloading it.

I wasn’t even able to install this UML editor.

I couldn’t even understand how to use this software.

Web-based UML designer aren’t the best thing in the world. First of all, none, or most of them aren’t open source. Most of the ones I found were slow or didn’t work correctly. The main reason someone might want to use one of those might be for collaboration. If you want to try some here’s a list with review:

Apparently gliffy can be used on the desktop as a chrome app which is good.

It’s not open source but seems like working almost flawlessly.

It’s an excellent free class diagram tool that I recommend.

Moral of the story

I spent all day installing one after the other all the UML editors I could find in the Arch repo and in the end almost none of them were satisfying or even working as expected. Only two of them caught my attention:

gaphor, which worked perfectly although missing some features, and

tinyuml, which is extremely small and has all I need for class diagrams.

What do you think?